It's The Most Powerful Way To Rocket To The Top Of Your Business Or Profession. 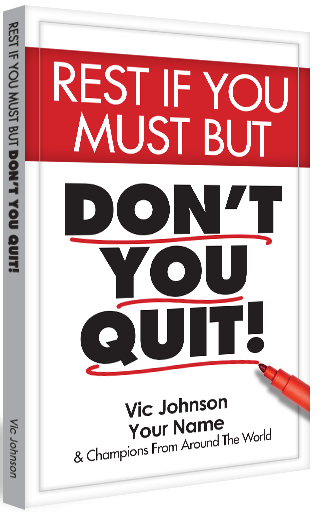 Imagine the new authority, celebrity and influence you'll have with your prospects, clients and customers once you've achieved Best Selling Author status.

It's an achievement that you can claim for a lifetime and can make you one of the top trusted authorities in your niche. That can attract higher quality clients and customers and joint ventures with other trusted authorities that will explode your presence.

Become A Best Selling Author, Guaranteed! …And You Don’t Even Have To Write A Single Word If You Don't Want To!

Your Co-Author Knows The Formula That Will Make Don't You Quit An Amazon Best Seller! 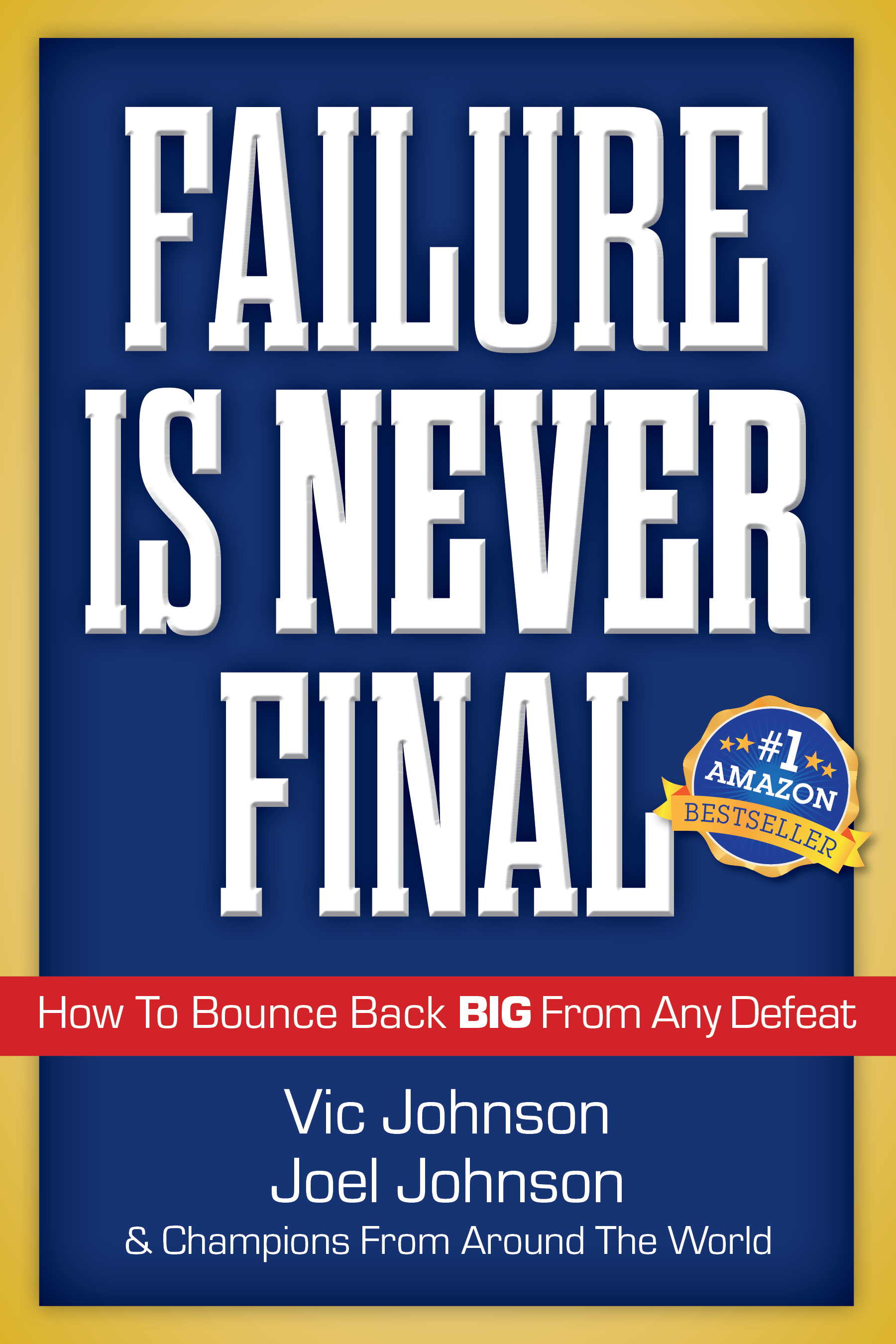 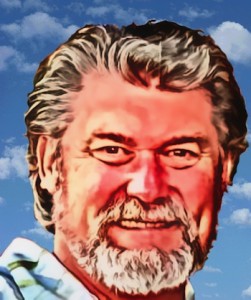 Evicted from his home in 1996 and his last car lost to repossession a year later, Vic Johnson's story has become an oft-quoted source of inspiration to the more than 300,000 subscribers he serves worldwide. He is a 7-time Amazon Best Selling Author and his books have been translated into Japanese, Russian, Czech, Slovak, Korean and Farsi. He has appeared in numerous video programs with Bob Proctor, Jim Rohn, Brian Tracy, Denis Waitley and Mark Victor Hansen, among others. 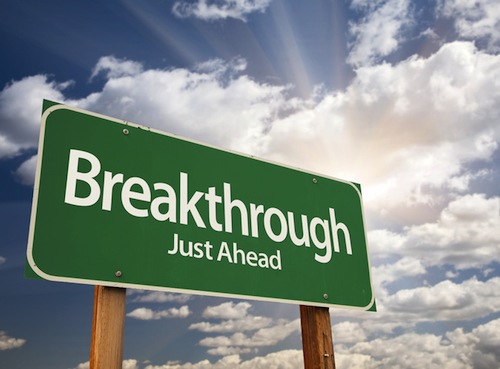 Your best selling book is like a magnet for money. It attracts speaking engagements, higher-paying clients, and bigger consulting opportunities, and that's just a start.

Suddenly people who you thought were previously unreachable are now paying attention to you and even calling you to do business with you. Doors will open for you with amazing opportunities inside that you didn’t even know existed.

If you hand your prospective customer or client a (signed) copy of your best selling book and all your competitors hand them a business card or ho-hum brochure, which one do you think IMMEDIATELY gets elevated in the eyes of the prospect? We throw business cards and brochures away every day, but we rarely throw a book away -- especially a best seller!

Imagine that 2016 is THE year that you finally breakthrough! A best selling book has the power to take your business and career to an entirely new level unlike anything you've experienced.

Acceptance as a co-author (the Program) is contingent upon our review of your application. All monies will be refunded if your application is not accepted. Your Enrollment Fee is fully due and payable prior to the start date of June 1, 2016. We may provide you with a payment schedule for you to complete your payment of the Enrollment Fee; however, no payment schedule relieves you of your obligation to pay the entire Enrollment Fee, even if you do not complete the Program for any reason. If you miss any scheduled payment, the payment schedule is void and the entire balance becomes due and payable. By your submission of the Program Application you acknowledge that all fees are non-refundable and you agree that you will not contest any bank transfers or charge back your credit card for any charges after the program has started. During the course of the Program, you will work with a personal coach, Vic Johnson or other individuals (Program Mentors) to develop your 2,000 word chapter. Your success in the Program requires full and active participation. For your contribution to be included in Don't You Quit (the “Book”), you must fully and actively participate in the Program to ensure: (1) We receive all interim and final drafts of your contribution in accordance with the schedule we provide you; and (2) your contribution meets or exceeds the minimum standards as determined by us. We will be solely and exclusively responsible for all editorial and publishing decisions, including among others the decision to include or exclude your contribution from the Book if it does not meet our editorial standards. Copyright Authorship - Upon acceptance in the program we commission you to create your contribution for the the Book, which constitutes a collective work, as a “work made for hire” under United States copyright law. If any body of competent jurisdiction determines that your contribution is not a “work made for hire”, then you assign a fully transferable, perpetual, exclusive, worldwide license of your contribution to the publisher, Laurenzana Press. The terms “Co-Author” and/or “Co-Authorship” as used in the materials relating to the Program are not intended to and do not give you rights of authorship in any joint work under United States copyright law.

Original Work - You agree and warrant that your contribution to the Book is your own original work of authorship. You further agree to indemnify and hold harmless AsAManThinketh.net Seminars LLC, Laurenzana Press and all other participants in the Program in the event that your contribution is not your own original work of authorship and from any and all claims that might arise as a result of your work. Royalty Rights and Non-Exclusive Use - Upon your successful completion of the Program and the publication of the Book, we grant you a non-exclusive, world-wide, royalty-free, perpetual and irrevocable right and license to copy and distribute and display the Book, in whole or in part, in its printed form or digital printed form. You agree that Laurenzana Press is the Publisher of Record and will be entitled to all royalties it earns from its sales of the the Book. You also agree that you will not publish the Book on Amazon.com (and its affiliated sites), the iTunes Bookstore, BN.com and any of the Channels in Smashwords Premium Catalog. Book Copies - You will receive one-hundred (100) complimentary copies of the Book (200 copies if you paid your Enrollment Fee in full in advance) shortly after it is published. The copies will feature you and Vic Johnson on the front cover as co-authors. You will be provided access to your own wholesale account where you may purchase additional copies at the prevailing wholesale price. If a dispute arises you and us we mutually agree to first try to resolve it with the help of a mutually agreed-upon mediator in Gainesville, Florida. Any costs and fees other than attorney fees and travel costs associated with the mediation will be shared equally by each of us. If it proves impossible to arrive at a mutually satisfactory solution through mediation, we mutually agree to submit the dispute to binding arbitration at Gainesville, Florida, under the rules of the American Arbitration Association. Judgment upon the award rendered by the arbitration may be entered in any court with jurisdiction to do so. By your submission of the Program Application you acknowledge your agreement with the terms provided here ("The Fine Print").